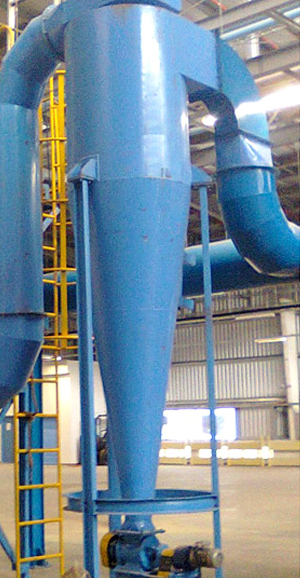 In cyclone separators, cyclonic separation method of removing particulates is used. Rotational effects and gravity are used to separate mixtures of solids and fluids. Cyclonic separation is a method of removing particulates from an air, gas or liquid stream, without the use of filters, through vortex separation method. The method can also be used to separate fine droplets of liquid from a gaseous stream. A high speed rotating air flow is established within a cylindrical or conical container called a cyclone. Air flows in a helical pattern, starting from the top wide end of the cyclone and ending at the bottom narrow end then the air stream moves in a straight path through the center of the cyclone and comes out from the top. Larger particles in the rotating stream have too much inertia to follow the tight curve of the stream, due to this they strike the outside wall, and then fall to the bottom of the cyclone from where they can be removed easily.

Cyclone Separator is most effective on coarse particles size 20 microns and above. However, for fine particles and less than 20 microns size, the collection efficiency drops considerably below 80 %. 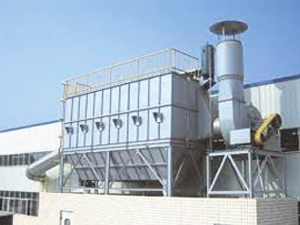 Multi Cyclone Dust Collector consists of a number of small-diameter cyclones, operating in parallel and having a common gas inlet and outlet. Multi-clones operate on the same principle as cyclones–creating a main downward vortex and an ascending inner vortex. However, Multicyclone Separators are more efficient than single Cyclone Separators because they are longer and smaller in diameter. The longer length provides longer residence time while the smaller diameter creates greater centrifugal force.

These two factors result in better separation of the dust particles. The pressure drop of the Multiclone collectors is higher than that of single cyclone separators. Multicyclones can deliver over 99% efficiency in dust collection for particles size of 5 microns and larger in size. However, the removal efficiency varies with the operating conditions. The capacity and specifications of the system varies based on the particulate size, air volume and temperature of dust to be collected and other design parameters.